On reaching Una your expert Himachal Devi Darshan Cab Driver will receive you and will take you to the hotel for freshen up. Rest for sometime relax,freshen up and then drive by road to the Mata Chintpurni Temple or Mata Shri Chhinnamastika Devi.The distance from Una to Chintpurni Devi temple is about 51 kms and the drive takes about 1.5 hours to reach.
On reaching Chintpurni Shaktipeeth you can pray at the lotus feet of Mata Shri Chhinnamastika Devi temple.According to legend the feet of Devi Sati fell at this place and is thus considered one of the most important of the 51 Shakti Peeths. It is believed that if you ask something from the Devi with a true heart, your wish will be granted.
On the way visit Bagla Mukhi temple.It is believed that worship of goddess Baglamukhi acts like a weapon to stop your enemy from doing harm against you. Goddess Baglamukhi also has the power of turning things into its opposite. She can turn silence into speech, ignorance into knowledge, defeat into a victory, ugliness into beauty and poverty into wealth.
Drive towards Mata Brajeshwari Temple at Kangra which is popular for its elaborated fabrications along with the rich rituals performed there. The main deity of this temple is Brajeshwari Devi who is also known as Vajrayogini . She is also the incarnation of Parvati, the Goddess or Aadi Maya on the Earth.Later proceed for Chamunda Devi Temple which is about 25 kms from Kangra.
Check in to your hotel at Chamunda Devi for night stay.You can attend the evening Aarti of Maa Chamunda Devi.
Day 2:Chamunda Devi-Baijnath Shiv Temple-Palampur 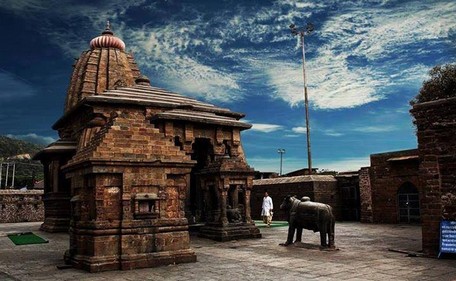 Early in the morning you can attend morning Aarti at Chamunda Ji temple.The Chamunda Devi Temple is a shrine to the wrathful form of Goddess Durga or Chamunda who in Hindu Mythology is the symbol of female power. The idol of Goddess Chamunda in the temple is considered so sacred that it is completely hidden beneath a red cloth and is kept so always. Seek blessings from Goddess Chamunda & drive towards Baijnath Shiv Temple.
Baijnath Temple is a major shrine dedicated to Lord Shiva. In this temple homage is paid to Vaidyanath or Lord of Physicians, which is one of the forms of Lord Shiva. The Shikhara Style temple built in 1204 AD with gardens and pathways has exquisitely crafted floral patterns and images of deities on the wall that adds to the overall beauty of the temple.The temple has 20 feet Mandapa supported by four pillars and two attractive statues of Nandi Bull with a small human figure holding the tail of Nandi. It is believed that the king of demons Ravana sacrificed his head ten times here and since then there are no Dussehra celebrations in the temple. The water at Baijnath Temple is believed to have curative and medicinal properties.
Later in the evening return back to Palampur and visit Tea Gardens on the way.
Day 3:Jwala Ji-Naina Devi-Una