5 Himachal Devi Darshan Itinerary
Day 1: Chandigarh Arrival
Your spiritual journey starts from Chandigarh, our representative  will recieve you from Chandigarh Airport/ Railway station &  drop at hotel. Later after check in to the  hotel, freshen up & proceed for Mansa Devi Shaktipeeth where forehead of Devi Sati fell. After seeking blessings from Mansa Devi we will take you to the famous Rock Garden, Sukhna Lake, Rose Garden & Sector-17 of Chandigarh. Night Stay at Hotel.
Day 2: Chandigarh Naina Devi Chintpurni
Start your divine journey for Naina Devi Shatipeeth where Devi Sati’s eyes fell after her body was cut into several parts by the Sudershan Chakra of Lord Vishnu. Naina Devi is situated at a distance of 102 kms from Chandigarh.
The temple of Naina Devi Ji is positioned on hilltop & you can reach the peak of hill by following the concrete stairs or using cable car facility. The eyes of Devi Sati fall at this place.
After having darshan of Mata Naina Devi Ji we will proceed for Chintpurni Shaktipeeth situated at a distance of 103 kms. Chintpurni Shaktipeeth is also known as Mata Shri Chhinnamastika Devi. Devi Sati’s feet fell at this place.
It is believed that if you ask something from the Devi with a true heart, your wish will be granted.
On reaching check in to your hotel and freshen up. Later visit Garbha Griha & have darshan of Mata Ji. According to legend the head of Devi Sati fell at this place and is thus considered one of the most important of the 51 Shakti Peeths. The Goddess is depicted in a pindi (phallic) form at the temple & is also known as Shri Chhinnamastika Devi who takes away all the worries of her devotees. The term 'Chhinnamastika' means 'without the head'. Night stay at hotel in Chintpurni.
Day 3: Jwalaji Shaktipeeth Nagarkot Brajeshwari Devi Shaktipeeth Chamunda Nandikeshwar Dhaam
In the morning we will drive for 32 kms to reach Jwala Ji Shaktipeeth dedicated to Jwala Devi- the presiding deity in the form of flames. Due to this fact, the goddess is also referred as the 'Flaming Goddess'.  As per the legends Jwala Ji Devi temple is also one of the 51 Shaktipeeths where the mouth or tongue of Devi Sati fell here at the time of self-sacrifice. Ever since, the Goddess occupied the place and she manifested in nine flames that are named as Mahakali, Annapurna, Chandi, Hinglaj, Vindhya Vasini, Mahalakshmi, Saraswati, Ambika and Anji Devi respectively.Seek the divine blessings from Jwala Mata Ji & spend some time visiting the nearby temples such as Gorakh Dibbi & Garbh Grih.It is said that centuries ago, a shephard saw the flames for the first time and Raja Bhumi Chandra, the ruler of the area had the original temple built. The Mughal Emperor Akbar installed a gold parasol and Maharaja Ranjit Singh had the dome gilded. Across the courtyard is Devi`s bed chamber and above the temple is the shrine of Baba Gorakhnath.
In the afternoon we will drive for about 1 hour to reach  Nagarkot Brajeshwari Devi Temple at Kangra. The main deity of this temple is Bajreshwari Devi who is also known as Vajrayogini . She is also the incarnation of Parvati, the Goddess or Aadi Maya on the Earth. It is one of the 51 Shaktipeeths of Devi Mata Ji. After darshans we will drive towards Chamunda Devi. The drive usually takes around 1 hour to finish. On reaching check in to your hotel, freshen up. You can attend evening Aarti of Chamunda Devi. Night stay at hotel in Chamunda.
Day 4: Chamunda Devi  Dharamshala Mcleodganj Sightseeing

Visit Chamunda Devi Temple dedicated to the wrathful form of Goddess Durga or Chamunda who in Hindu Mythology is the symbol of female power. The idol of Goddess Chamunda in the temple is considered so sacred that it is completely hidden beneath a red cloth and is kept so always. Seek blessings from Goddess Chamunda and later proceed for Dharamshala.
We will start are sightseeing tour by visiting McLeodganj which has a distinctly different character, with its brightly painted buildings, Buddhist temples, prayer flags fluttering in the air and saffron monks and nuns hurrying along the streets. You will be visiting the main Buddhist temple or Tsuglagkhang (cathedral). It is believed that the temple resembles the one in Lhasa, and is surrounded by red and gold prayer wheels that are set in motion by devotees to scatter prayers in the air.
After spending time on the Mall Road we will visit Dal Lake  along with Church of St. John in the Wilderness, built in 1860.Overnight stay at hotel.
Day 5: Dharamshala Baglamukhi Temple  Chandigarh 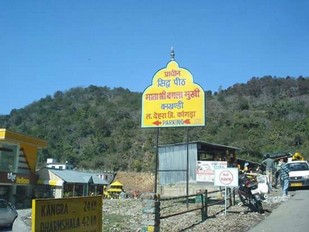 After check out proceed for Chandigarh and visit Mata Baglamukhi temple on the way. It is believed that worship of goddess Baglamukhi acts like a weapon to stop your enemy from doing harm against you. Goddess Baglamukhi also has the power of turning things into its opposite. She can turn silence into speech, ignorance into knowledge, defeat into a victory, ugliness into beauty and poverty into wealth.Later proceed for Chandigarh. On reaching Chandigarh we will drop you at the railway station in the evening. In the evening board your train & return back to your desired destination with blessings of Durga Mata Ji.
Get the Best Holidays Planned by Experts!
Accommodation
Himachal Devi Darshan Package Inclusions
Inclusions
Jwala ji,Kangra Devi,Chamunda Devi and Bagla Mukhi.
Exclusions
Back to content