On your arrival, our Devi Darshan Taxi Driver/ representative will receive you from New Delhi Airport/ Railway station. We will drive for about 5-6 hours to reach Chandigarh. On reaching check in to the pre-booked room. After freshen up we will visit the famous Shaktipeeth of Mansa Devi . This temple is the holy abode of Mansa Goddess. Devotees horde this place to tie a thread around the tree as it is believed that wishes of people come true by doing it. After darshan of Mansa Devi Ji we will visit Rock Garden & Sukhna Lake. If you wish you can visit Market of Sector 22 and do shopping for yourself and your nears and dears. Night stay at hotel.


After breakfast check out from your hotel and drive for about 3 hours to reach Naina Devi located at a distance of about 104 kms from Chandigarh. The Temple of Shri Naina Devi Ji is situated on a hilltop at a height of 1219 m above sea level, it was built by Raja Bir Chand in the 8th century. This temple was constructed on a triangular hillock and is considered one of the 51 Shakti Peeths of Sati. The temple can be reached on foot or manual carriages. There is also a ropeway that can be used to reach the hilltop. After crossing the main entrance gate, you will notice a grand Peepal tree on the left side. Just opposite the tree, there are idols of Lord Ganesha and Lord Hanuman. Upon reaching the main temple, you will be greeted by two statues of lions. The inner sanctum of the temple has three idols- Kali Devi on the left, the Eyes of the Shakti in the middle, and Lord Ganesha on the right. The entire stretch leading up to the temple is lined with small shops that sell prasad and souvenirs. The temple attracts thousands of devotees and can be very crowded on auspicious Hindu days. This temple is among the most revered temples in the country. The eyes of Devi Sati fall at this place. Later we will drive for about 3 hours to reach Chintpurni Shaktipeeth located at a distance of about 110 kms from Naina Devi Ji.


Chintpurni Shaktipeeth is also known as Mata Shri Chhinnamastika Devi. Visit Garbha Griha & have darshan of Mata Ji. According to legend the head of Devi Sati fell at this place and is thus considered one of the most important of the 51 Shakti Peeths. The Goddess is depicted in a pindi (phallic) form at the temple & is also known as Shri Chhinnamastika Devi who takes away all the worries of her devotees. The term 'Chhinnamastika' means 'without the head'. After darshans we will drive for about one hour from Chintpurni to Jwala Ji Temple situated at a distance of 33 kms. Check in to your hotel for night stay.


Early morning attend Morning Aarti of Mata Jwala Ji- the presiding deity present in the form of flames. Due to this fact, the goddess is also referred as the 'Flaming Goddess'. As per the legends Jwala Ji Devi temple is also one of the 51 Shaktipeeths where the mouth or tongue of Devi Sati fell here at the time of self-sacrifice. Ever since, the Goddess occupied the place and she manifested in nine flames that are named as Mahakali, Annapurna, Chandi, Hinglaj, Vindhya Vasini, Mahalakshmi, Saraswati, Ambika and Anji Devi respectively. Seek the divine blessings from Jwala Mata Ji & spend some time visiting the nearby temples such as Gorakh Dibbi & Garbh Grih. It is said that centuries ago, a shephard saw the flames for the first time and Raja Bhumi Chandra, the ruler of the area had the original temple built. The Mughal Emperor Akbar installed a gold parasol and Maharaja Ranjit Singh had the dome gilded. Across the courtyard is Devi`s bed chamber and above the temple is the shrine of Baba Gorakhnath.


After darshans we will drive again for about 1 Hour to reach Bagla Mukhi Temle. The shrine is dedicated to one of the Ten Mahavidyas of the Supreme Goddess as per Shaktism. Devotees visit the temple with hopes of getting their wishes fulfilled, cases won, exams passed or life otherwise to be happy and successful. It is said that anything asked for after performing homagni and yajna at the temple is granted. The name Bagalamukhi comes from two separate Sanskrit words, 'Bagala' meaning 'bride' and 'mukhi' meaning 'face'. In essence, it translates to the deity having captivating and hypnotising powers in her face or herself which fights the evil away. It is said that yellow is the favourite colour of the goddess which is why the Baglamukhi Temple has been painted yellow in colour. All the worshippers of the Goddess wear yellow coloured clothes, and yellow sweets are offered to the deity. Many festivals are celebrated at Maa Baglamukhi Temple including Navratri, Guru Purnima, Vasant Panchami, and other special pujas and aartis.


Later proceed for Brajeshwari Devi ( Kangra Devi) situated at a distance of about 24 Kms from Bagla Mukhi. The main deity of this temple is Bajreshwari Devi who is also known as Vajrayogini or Nagarkot Dhaam. She is also the incarnation of Parvati, the Goddess or Aadi Maya on the Earth. It is one of the 51 Shaktipeeths of Devi Mata Ji. It is said to be built over the ashen and charred breasts of Goddess Sati. The sacred and holy shrine is known for its extreme wealth it has gathered overages. Later we will drive for about 26 kms to reach Chamunda Devi for night stay at hotel.


In the morning visit Chamunda Devi Temple dedicated to the wrathful form of Goddess Durga or Chamunda who in Hindu Mythology is the symbol of female power. The idol of Goddess Chamunda in the temple is considered so sacred that it is completely hidden beneath a red cloth and is kept so always. According to the legend Chamunda emerged from an eyebrow of Goddess Durga with an aim to kill demons Chanda and Munda. Seek blessings from Goddess Chamunda & drive to Dharamshala. On reaching Dharamshala visit Kunal Pathri Mandir. This temple is where the forehead of Sati fell, hence it is also called Kapaaleshwari temple. There is a small rock (saucer or forehead shaped), on which there is always water, since time immemorial. It never dries, though it is used by the priest for goddess.When it is about to dry, there is rainfall and the rock fills up with water, through a small opening in the roof.


Post breakfast we will drive towards the holy town of Katra. The drive usually takes around 6 Hours from Dharamshala to Katra. On reaching Katra, check in to your pre booked hotel and relax. Get your Yatra Parchi and later proceed for the holy yatra of Mata Shri Vaishno Devi Ji nestling on top of the Trikuta Hills at a height of 1,700 mt.

Night stay at hotel in Katra.You can also start your journey same day, if you get your Yatra Parchi.

From Katra, you will climb one km to Banganga, where the goddess is believed to have stopped to drink water; then after a couple of kms you will reach Charan Paduka where the goddess stopped and looked behind while running away from the Bhairon Nath; 6 kms further is the cave shrine of Ardhkunwari, where it is believed she rested and meditated for nine months.


The last halt before the actual shrine is the Bhawan, where there are arrangements for wash- and- change, accommodation and for depositing luggage and valuables.


The vaishno devi cave is 30 metres long and just one-and-a half mt high. At the end of the cave are shrines dedicated to the three forms of the mother goddess – Mahakali, Mahalakshmi and Mahasarasvati. A rock just opposite these Pindees in the main Bhawan oozes out continuous natural water and is said to mark the presence of Lord Shiva in the temple.Pilgrims have to enter in small groups through a narrow opening and walk through ice-cold waters to reach the shrines. According to legend, the mother goddess hid in the cave while escaping a demon (Bhairon Nath), whom she ultimately killed.

Start your return journey for Katra. On returning back, relax at your hotel for night stay.

Check out from your hotel and we will drop you at your desired point according to your requirement.


Note: All our tours are customizable meaning if you also want to spend more days in North India and wish to visit Amritsar, all you need to do is ask! The team at Tour Trip Mart.com would
like to thank you for choosing to visit 9 Devi Temples with us.

Get the Best Holidays Planned by Experts! 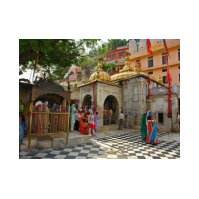 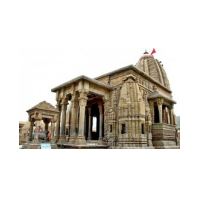 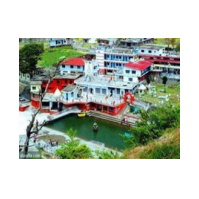 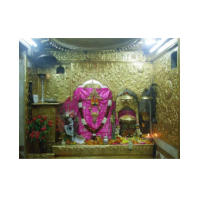 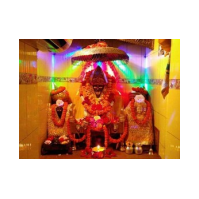 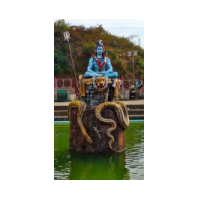 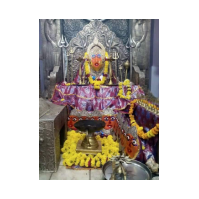 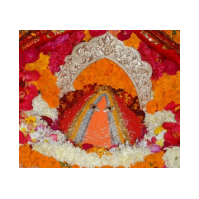 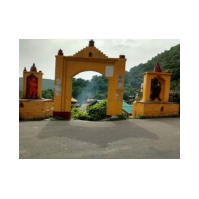 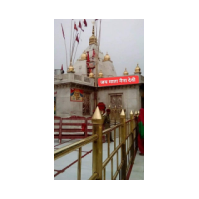 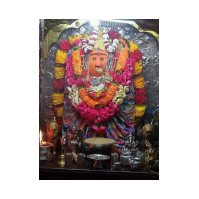 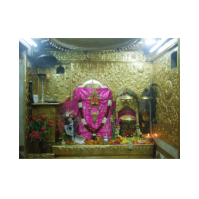 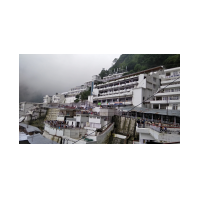 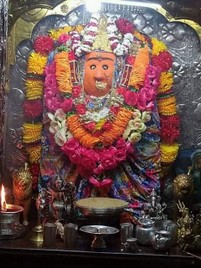 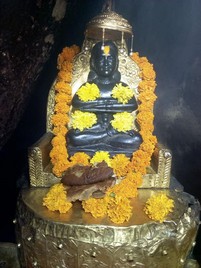 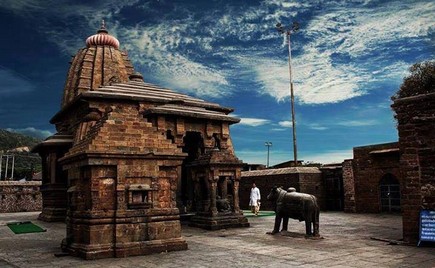